Making The Process Affordable When Fixing Up Your Home 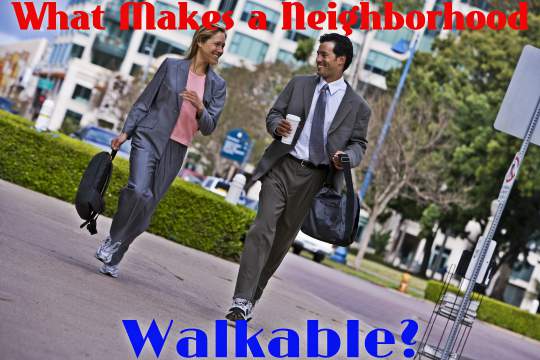 What makes any particular neighborhood or area walkable? Sure, you walk from your house to your car, or from your car to wherever you’re going once you’ve parked; however, that’s not what we mean by walkable. A neighborhood’s walkability rating is based on how much on average the local populace is able to walk to and from their places of interest with minimum use of cars or other road vehicles. Walk-ability is one of the major factors buyers use in how to choose a neighborhood when purchasing a home. The location of a neighborhood in relation to major conveniences can become a major search factor for numerous buyers. Other important considerations include top schools, highway access and crime rate to name a few.

“Made for Walking” author Julie Campoli describes five main pillars that are critical characteristics of walk-ability:
● Connections: an extensive network of walking paths and expansive sidewalks that have numerous intersections throughout.
● Tissue: Smaller buildings constructed with impressive architecture with multiple functions rather than large skyscrapers and expansive warehouse-sized buildings.
● Density: All buildings are built very close together to accommodate walk-ability and people live in very close proximity to one another to promote a sense of community.
● Street-scape: Streamlined streets designed with wide sidewalks to minimize walking traffic and promote business visibility.
● Green Networks: There are many trees that line the streets and surrounding areas in addition to plenty of grassy areas and parks for recreation and relaxation.

Campoli claims that “Increasing densities to levels near or exceeding those typical of cities in 1910 by concentrating housing, jobs, schools, stores, parks, and population is the best way to shrink commute zones from 80 or 20 square miles to zones as small as two and a half square miles.”

These were the studies consulted:

● Growing Cooler (Ewing et al. 2008) – predicts that compact development could decrease VMT by 20-40% and reduce greenhouse gases (GHG) by 18-36%
● Moving Cooler (Cambridge Systematics 2009) – focused on better practices for mixed-use land utilization, reducing VMT by 20% and emissions by 60%
● Driving and the Built Environment (Transportation Research Board 2009) – predicts that with people’s current ravel habits, VMT could be reduced by 1-11%

There have been critics that have said compact urban development will not make that large of a dent in America’s emissions output, and is not worth pursuing; critics instead believe that relying solely on things like improved fuel technology in vehicles will have more impact. While it is true that technology will play a large role, it is only a piece of the puzzle. Campoli also states that “Unlike other carbon-reduction strategies, realization of a sufficiently compact pattern will take several decades to materialize, which is why most studies of the potential of compact development predict only minimal CO2 reductions in the early years.”

When it comes to planning and executing compact urban development, Cervero and Kockelman first stated in 1997 (and later expanded by following studies) that there are five D’s and a P that urban developers follow:

● Diversity: Not that different kinds of people living in a single neighborhood isn’t important, but in the context of compact urban development, this ‘D’ refers to there being a healthy mix different kinds of businesses with homes. Also, most buildings are optimized for mixed-use, meaning that you could have a shop on the bottom floor and an apartment on the top floor, for example. The more functional diversity you have in a neighborhood of businesses and services, the more likely residents are to walk or bike to popular destinations rather than drive farther.
● Density: This ‘D’ references the amount of people and employment opportunities in a given area such as population per square mile. Having a higher concentration of people in a smaller area encourages better community engagement while having more opportunities in tandem also provides the local populace with incentive to use transportation that yields less emissions (walking, biking, and public transit).
● Distance to Transit: Though there are many variables, the biggest determining factor for most people is how far the nearest stop is from their home when deciding to take a bus or train. This has become an issue in sprawling communities who will often opt to drive instead of walking a long distance to and from stations. This goes hand-in-hand with density since proximity to way-points are compacted along with neighborhoods in their distances from a person’s home, work, or other places of interest.
● Design: Possibly the most important ‘D’ initially, this falls on the urban developers themselves from the get-go. It’s difficult to have compact urban development without first planning street and building lot layouts in association to their proximity to each other as well as transportation modes. Design is not only just for functionality though; in order to persuade people to want to walk more, you must make the route in which they are taking as aesthetically pleasing and interconnected as possible so that there are no perceived limits to where one can travel by foot.
● Destination Accessibility: How close is your home to some of the more popular spots in town? One’s ability to easily and quickly gain access to points of interest and central business districts (CBD) where many jobs and amenities like restaurants and shops are concentrated is paramount to making compact urban development work smoothly. Additionally, a given populace’s ability to get many basic goods and services (food, groceries, basic products) in their own neighborhood as opposed to driving 5-10 miles away facilitates good destination accessibility.
● Parking: The odd-letter-out, most current land development is centered around the ability of drivers to be able to park their cars easily and in large numbers. However, by limiting parking spaces and/or charging for parking, public transit, biking, and walking is vicariously encouraged among the local population. Land development is also freer to use lots for more housing or businesses instead of allocating more space for cars.

❏ Low vehicle speeds and traffic flow
❏ Roads with only one lane for each direction
❏ Multiple street crossings that are wide and defined
❏ Wide sidewalks that are unobstructed and allow people to pass by with ease
❏ Pavement is maintained and even to prevent tripping and falling
❏ Walking paths that are level for ease of walking
❏ Areas that have hills and inclines have plenty of benches for resting
❏ Street names and signposts are clearly visible at street level
❏ Map kiosks are numerous and include average walk times for easy navigation
❏ All streets and areas are well-lit with street lamps for safety and visibility
❏ Numerous police officers and/or private security personnel for added security
❏ Dense commerce areas to deter criminal and disruptive behavior
❏ Streets are kept clean from littering and trash/recycle bins are plentiful
❏ A good amount of land space is used for parks, nature paths, trees, and other greenery
❏ Architecture is built to seem more inviting and warm rather than steely and sterile
❏ All business and store fronts face the street for easy accessibility and visibility
❏ Designated play areas that are safe for children
❏ Low traffic noise and minimal stress in the local environment

Walkable Urban Places (WalkUps) have been known to decrease pollution, stress, traffic, and crime as well as increase economic growth, safe places for kids, bike paths, and better areas for recreation and socialization. WalkUP neighborhoods seem to be the new wave of land development, so how does your own neighborhood compare?

About the Author:
Based in Los Angeles, Jonathan Dean has been writing professionally since 2009. He writes for JustRentToOwn.com and his professional interests include housing trends, personal finance, and new urban development.