Tips to Help You Be a Successful Landlord in Massachusetts

What Size Down Payment Do You Need To Buy a Home?

What to Consider When Moving to Massachusetts

Helpful Real Estate Advice For Buyers and Sellers For December 2022

When To Do a Short Sale Home Inspection

Divorce and Selling a Home

What to Consider When Moving to Massachusetts 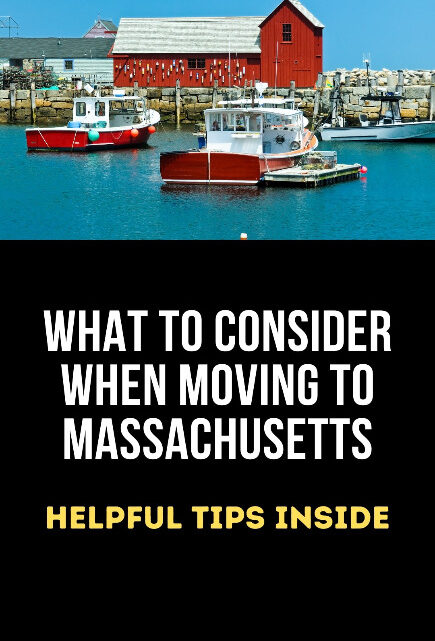 If you’re looking to move to Massachusetts, you’ll want to consider all the different aspects of living in this great state. Before making the big move, there are many things to consider, from the cost of living and taxes to the weather and job market.

This article will discuss some of the most critical factors you must consider when moving to Massachusetts.

Moving to a new state is an exciting but challenging endeavor. In addition to the emotional upheaval of leaving your old life behind, you also have to deal with the practicalities of relocating.

One of the biggest challenges is finding reliable and affordable movers. If you’re moving to Massachusetts, you’re in luck – the state is home to some of the best out-of-state movers in the country.

While there are many great options to choose from, it’s essential to research to find a mover that best suits your needs and budget. Once you’ve found the right mover, the next step is to start planning your move.

Make sure to give yourself plenty of time to pack and clean up your old home, as these tasks can often take longer than expected. Finally, don’t forget to budget for other relocation expenses, such as storage fees and utility hookups. 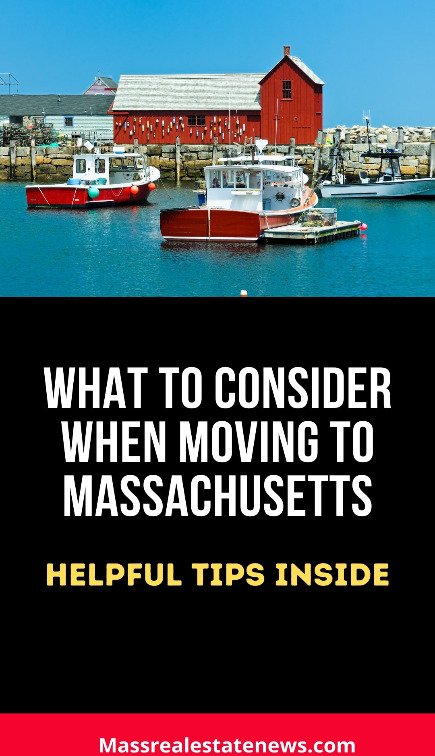 The Cost of Living in MA

Housing is one of the most significant expenses in the state, with the median home price coming in at over $400,000. Rent prices are also high, with the average two-bedroom apartment costing around $2,000 per month.

In Massachusetts, transportation costs can also be expensive, mainly if you rely on public transportation. And although the state has no sales tax, there is a 6.25% excise tax on items like gasoline and clothing.

So before you move to Massachusetts, be sure to budget carefully for your new cost of living.

Massachusetts taxes are complex. The state has a 5.05% personal income tax rate, which is lower than the national average of 6.03%.

Massachusetts also has a sales tax of 6.25%, higher than the average of 5.51%. However, there are several exemptions to the sales tax, including food, clothing, and prescription drugs.

In addition, Massachusetts has a property tax rate of 1.21%, which is lower than the national average of 1.08%. The state also imposes an estate tax levied on estates valued at over $1 million.

When becoming a property owner, it is essential to understand how to challenge high property taxes.

It is possible that your property’s assessed value could be out of line with other similar properties. It becomes essential to check, so you know you’re paying your fair share.

Moving to Massachusetts from another state can be a big adjustment, especially regarding the weather.

The climate in Massachusetts is quite diverse, ranging from the cold winters of the Berkshires to the mild summers of Cape Cod. However, there are a few things that all residents can expect during the year.

First, Massachusetts generally has a lot of rain, so pack your raincoat! Second, the winters can be quite snowy, especially in the western and central parts of the state. Be sure to have a good pair of boots and a shovel handy. Finally, although the summers are usually warm, they can also be humid.

Be sure to keep hydrated and take breaks in the shade if you’re spending time outdoors. With a little preparation, you’ll be able to enjoy all four seasons in Massachusetts!

The job market in Massachusetts is strong, with most industries seeing steady growth over the past few years. The tech industry is robust, with many major companies in Boston.

Manufacturing and financial services are also essential parts of the economy. In addition, there are several educational institutions in the state which provide jobs in teaching, research, and administration.

Finally, tourism is an integral part of the Massachusetts economy, with many visitors coming yearly.

The housing market in Massachusetts is robust, with home prices steadily rising over the past few years. The median home price across the state is around $400,000, making it one of the most expensive states to buy a house in.

However, there are some more affordable areas within the state, particularly if you’re willing to look outside of the Boston metropolitan area.

One of the most popular areas is the Metrowest Mass region which encompasses numerous towns around 30-50 minutes from the city.

Rent prices are also high, with the average two-bedroom apartment costing around $2,000 per month.

However, there are still areas of the state where crime rates are higher than average. For example, the city of Springfield has a violent crime rate of 648 per 100,000 residents, which is more than four times the state average.

Similarly, the city of Worcester has a property crime rate of 3,427 per 100,000 residents, which is about 30% higher than the state average. While the overall crime rate in Massachusetts is relatively low, there are still areas where criminals target victims.

Massachusetts is home to some of the best schools and universities in the nation, making it an ideal place for quality education.

The state is home to several highly-regarded public universities, including the University of Massachusetts-Amherst, Tufts University, and Harvard University. In addition, there are many excellent private colleges and universities throughout the state, including Boston College and MIT.

The quality of school districts also varies throughout the state, so be sure to do your research when looking for a place to live with good schools.

Massachusetts is known for its high quality of healthcare, and the state has some of the best hospitals in the country.

The state’s health insurance system is also one of the most expansive in the nation, with nearly all residents covered by some form of health insurance. In addition, Massachusetts has a wide variety of healthcare providers that accept various plans.

Whether you’re looking for a primary care physician or a specialty doctor, you should be able to find the services you need in Massachusetts.

Getting around Massachusetts can be challenging, especially if you’re from a state with less traffic.

Public transportation is available in most major cities and towns, but it can sometimes be slow and unreliable. However, driving is usually the best option for getting from one place to another. Just make sure to leave plenty of time for your commute, as the roads in and around Boston can often be congested.

In addition, traffic is heavy during rush hour, so try to avoid driving during those times if possible.

No matter what you’re into, you’re sure to find something to do in Massachusetts. Whether you like to explore the outdoors or take in a show at an art museum, plenty of activities are available throughout the state.

In addition, there are numerous music venues and nightclubs for those who enjoy live entertainment. Finally, sports fans will find plenty of professional and college teams to cheer for in Massachusetts.

Conclusion for Moving to Massachusetts

Massachusetts is a great place to live, offering many activities and amenities. However, it is essential to consider factors such as cost of living, crime rate, education, healthcare, commute times, and entertainment options before moving.

By researching and understanding what Massachusetts offers, you can make an informed decision about whether or not it is the right place for you. With its rich history and diverse cultural attractions, Massachusetts is sure to provide an exciting new home for anyone looking to make a move.

What is the cost of living in Massachusetts?

The cost of living varies throughout the state, but overall it is slightly higher than the national average. The most expensive cities are generally in and around Boston, while more rural areas tend to be less expensive. Housing costs can also vary significantly depending on location.

Are there any good universities or colleges in Massachusetts?

Absolutely! Massachusetts is home to some of the best universities and colleges in the country, including Harvard University, MIT, and Boston College. In addition, there are many excellent public universities and community colleges throughout the state.

Is it easy to get around Massachusetts?

Generally speaking, it is relatively easy to get around Massachusetts. Public transportation is available in most major cities and towns, and driving is usually the best option for getting between smaller towns and rural areas. However, traffic can be heavy during rush hour in and around Boston, so plan accordingly.

Are there any entertainment options available in Massachusetts?

Absolutely! There are countless entertainment options throughout the state, from outdoor activities to live music venues and professional sports teams. No matter what you’re into, you should be able to find something to do in Massachusetts. 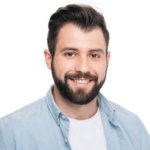 About the author: The above article on moving to Massachusetts was written by Joshua Haley. Joshua is a professional content writer with a master’s degree in writing studies and more than seven years of experience in copywriting.

He previously worked as a freelancer, writing about moving, home decor, city guides, and real estate. Joshua has moved several times to and from different states in the U.S., so he has enough knowledge about the different aspects of the moving industry.

Next post What Size Down Payment Do You Need To Buy a Home?

Tips to Help You Be a Successful Landlord in Massachusetts